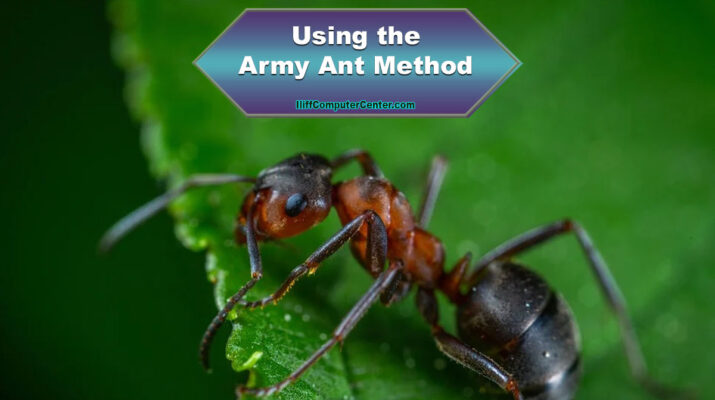 As I continue to look for different ways to improve the blogs, I came across something new. Well, kind of. It’s the “Army Ant Method” for creating a blog post. But, how well does it really work?

According to Passive Income Geek on YouTube, the method works quite well for driving an audience.

I still need to figure out how he’s getting nearly $40 RPMs. I just don’t see it being possible. He also uses Ezoic, though. But the last time I tried Ezoic, it vastly destroyed my site’s performance.

I’ll have to try that again in the future.

What is the Army Ant Method?

The “Army Ant Method” is where you take a lot of smaller content to create a larger article. In his example, Passive Income Geek showed that you can collect a list of questions that may not be good posts by themselves to create a listicle of FAQs.

The idea behind the Army Ant Method is to entice a click to find a specific answer and perhaps engage the visitor to continue reading.

The prospect behind it is sound. After all, we’ve increased traffic to various articles for my client by 200% just by answering a question in the “People also ask” section of Google.

So, I know the Q&A format works fairly well. I just never thought to create an entire listicle from questions in such a manner.

Experimenting with the Army Ant Method

In this experiment, I’m going to try Passive Income Geek’s method on all four of my major blogs: WriterSanctuary, CrossingColorado, ColoradoPlays, and Practically Living Green.

So, this is probably going to take me a few weeks to whip up the content. Mostly because I have way too much to do to really focus on one specific task.

The fun part is looking for a viable keyphrase. Not every topic I tend to cover has a long list of questions that are relevant in People also ask.

However, I do have access to AnswerThePublic.com…which usually pulls up a lot of good ideas.

Once I find a good keyphrase to use, I’ll take a look at both AnswerThePublic and People also ask to see what kind of questions I can add.

I’m not 100% sure on just how long these should be, though. To be honest, I’m not really sure if blog length is going to matter in this type of format. After all, I’m just answering questions.

So for this experiment, I’ll keep with the tried-and-true base length of 1200+ words. I found this to work exceptionally well, especially for tutorials.

Because none of my blogs bring in nearly as much traffic as Passive Income Geek, I’ll have to adjust the amount of time to track traffic.

In his stats, Passive Income Geek sees definitive traffic growth within two to three months. Usually, it takes my blogs between four and six. So for the Army Ant Method experiment, I’ll stick to my traditional 6-month analytics.

What Stats Am I Watching?

For this experiment, I’ll keep an eye on some of the most important metrics for my purposes. I mean, not everyone cares about the same data.

In Google’s Search Console, you can track how often an article is seen in search results. Now, this doesn’t necessarily mean a high number of impressions will guarantee traffic.

In fact, you can have an article shown 20,000 times and not get a single click. In this case, you’d want to adjust the title, meta description, or a blurb that drives someone to click based on the search criteria.

This is one of the metrics you’ll want to pay the most attention to in search. How often a person clicks on your titles can signify how well you’re engage that individual.

But, a high CTR doesn’t necessarily mean the article is successful. You can have a 75% CTR with only 4 impressions. This means three people liked the article enough to click.

Page Views in Google Analytics is a bit different than paying too much attention in Search Console.

For example, Search Console only shows how many people visited your post from search results. Page views count social media clicks, referrals, and more outside of the search engine.

The amount of time someone spends reading an article is one of the most important metrics to me. It shows that I’m creating content people want to read. And this goes a long way to demonstrating success.

The longer someone spends on your site, the better.

How Does the Army Ant Method Compare?

In this section, I’ll compare how the Army Ant Method stacks against other forms of content I create. This will include various styles such as how-to articles and listicles.

The geek in me is going to set up a spreadsheet that I can embed into this post. It’ll break down the data points of the Ant articles vs the other types.

I can’t to see how well it stacks against some of my reviews, though. I tend to hit pretty high in search with those.

The hard part is going to be finding articles that have similar search volume. Otherwise, the data will be skewed if one thing is getting more searches per month than another.

I’ll be comparing the final results to some of my other types of content. Between how-tos, best-ofs, and other styles, it’s going to be interesting to see if these actually work better.

One third of the way there...

Ah, the gym. One of the few places where it's soci

So, is it my gym bag smells so good, Max needs to

I like scented wax...it's almost as bad as my note